Got a small job where I've decided to use plasterboard instead of thistle, for a few reasons actually, main one being I'm not that good & there's a residual damp issue which I don't trust not to come through again with plaster (previous attempt at plastering the bottom 10 courses of brick resulted in bad salt efflorescence - wasn't tanked though). Also, it doesn't have to be too pretty because the wall will eventually be behind a built in cupboard. I will probably attempt a finish skim coat though.

The plaster was hacked off & brickwork left to dry out for about 2 years & the only remaining sign of damp on the party wall appears to be in one small area of pointing (circled blue). Previous damp-proof rendering under the window & in the corner of the outer wall seems to have been successful. So, I'm not sure if the source of the damp is rising damp or the result of a massive leak from upstairs next door about 10yrs ago, which affected my neighbour much worse.

Just as a FYI, I will be using a salt inhibitor & KA tanking slurry (up to blue arrow level) behind the gyproc, which will be attached with Sudal foam.

So, Q1. How much gap, if any, should I leave between the edge of the plasterboard & the existing plaster on the left & above that it's going to butt up next to?

Q2. As I will eventually be removing the skirting board along the wall to the left (red arrow) (as well as beneath the window wall corner - to dotted red line) to allow the back of the cupboard to lie flush to the wall, I'm not sure what I should fill the gaps with: plaster, plasterboard or wooden plank? (those bits of wood at the bottom were just there to stop mice getting in) 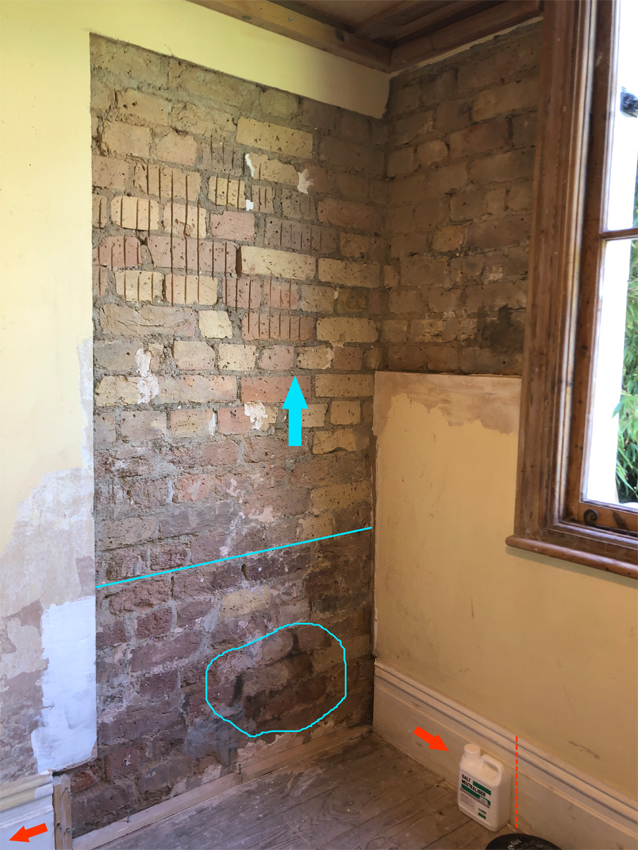